Best Quote I Heard All Day
I'm writing an unauthorized autobiography.--Stephen Wright
Me too, Stephen. Yes, it's been a long time since I've posted to the blog. For some time, I lost interest in communicating, partially because I buried myself in my book and also because I did some consulting work for a major financial services company.

The book has been ongoing for too long. No, I have no publisher yet and frankly, I'm writing this for my children and grandchildren, although it is my life as a knitter. I've designed knitting patterns that reflect the various hallmarks in my knitting life. It's been fun but also rather burdensome because when I turned 61 on April 25th, my mortality hit me between the eyes and I realized that my writing time is finite.

So back to writing the blog, another minor legacy, I suppose.

Word Up!
I gotta say, there are just too many damned knitting books out there. I no longer buy books that contain patterns only because I do my own, a far more challenging activity that spending time working on other people's shit. And because there has been an e-explosion of knitting patterns, you do have to wade through a pile of crap to get to decent stuff. On the other hand, it gives people freedom to publish, although I fear that some truly talented designers could get lost in the shuffle.

The two best books published this year are Elizabeth Zimmermann's Knit One Knit All and Barb Brown's Knitting Knee Highs. I reviewed Barb's book on February 11th. Bless Meg for gathering up all her mother's unpublished garter stitch designs and putting them together into a beautifully designed book. I'm still waiting for my copy, which I'll buy from my sistah-in-spirit Sheila, who owns my LYS Stix-n-Stitches. I did get a chance to peruse her copy and was blown away. After all, EZ was the original knitting origamist. That's what I call her Baby Surprise Jacket. Knitting origami.

The next book on my list will probably be Swirl! by Sandra McIver. This is not just a pattern book but an interesting technique that I'd like to study.

That's what's key--gimme a book that will shove new info into my gob. Just because it has "knitting" in its title doesn't mean it's going to add shit to my wealth of knowledge.

So WTF Are You Doing?
Other than waiting to start my new consulting gig next Monday, writing, and working on the book projects, I decided to pick up one of my spindles and start spinning some of Mindy Soucek's Puff the Magic Rabbit's wonderful mohair (from her own goaties)/Border Leicester/silk. (Check out her Etsy shop--some great fiber and handspun yarn for very reasonable prices.) 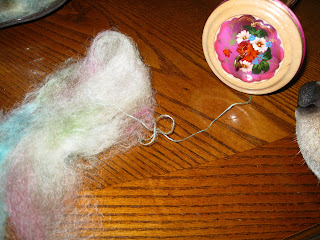 The nose? That's Sam's, the Countess von Puppelah, who is fascinated by the fiber smell and mesmerized by the spinning spindle. I suspect she'd like to chew both, so they are kept well hidden. The Countess has been known to chew hand knitted socks to shreds. She is not allowed in my workroom. Ever.

The Topic for Today is Yarn Bombing. Please Refer to the Blog Title.
Sorry, just getting geared up for tech writing. I've written about this stupidity on Facebook but it's time to diss it here. Yarn bombers--have you borrowed public idiocy from Tea Party members? Knitting tree cozies? Bike handle cozies? How about putting some effort into some charitable knitting, such as The Seamen's Church Institute, whose Christmas At Sea knitting project, active since 1898, has provided mariners away from home during the holidays with warm scarves, hats, vests, socks, and other goodies.  I understand this is now sponsored by Universal Yarn. Bravo, Michael! My late husband Jimmy, who was a ship modeler and maritime historian, often went to the SCI in NYC. Long ago, I knit for this project. I will so do again.

Yarn bombing doesn't make you look like a "rebel knitter" but rather, makes you look like you have nothing better to do with your time. If you want to make your community look nice, how about contributing flowers and your gardening skills? Fuck the stupid cozies. Yarn bombing does not improve knitting's image. In fact, it probably annoys the piss out of people. So stop it, already. It is not rare and handy.

What do you think of yarn bombing?

That's it for now. Time to get back to the other writing, or perhaps train Sam to wind yarn. By the way, I have just set up the blog for mobile viewing, a new beta feature on Blogger.

Later, skanks. The next post will probably be in July, hopefully in a week or so. The 25th of July marks the blog's 9th anniversary.
Posted by Unknown at 2:05 PM 20 comments: Links to this post