Ah, my Tontant Weaders. It's time for a Mrs. Parker quote. You know she was a big-time knitter, especially when she hung out at her house in New Hope, PA.

Blogger and Google+
Just hooked them together. When I hit Blogger to start this post, up pops this Hook Up with Google+ deal, so I did it. That's why my blog profile has changed. I'm on Google+ as well as Facebook, although I don't post constantly on either like some people, who seem to have nothing better to do than that. What I don't like about social networks is the lack of in-person contact. I'd rather see ya than read your post. OK, so I'm a fucking old fart.

Keep it Simple, Stupid. Or Keep it Simple Socks
So as I promised, I'm writin' the blog every week now. Even though I'm up to my eyeballs writing the contracted book, the manuscript due on August 8th, I'm still working on the sock book, "Keep it Simple Socks." Here's a picture of one of the designs, "Diamonds are a Girl's BFF."If you're my friend on Facebook, you've already seen this one. 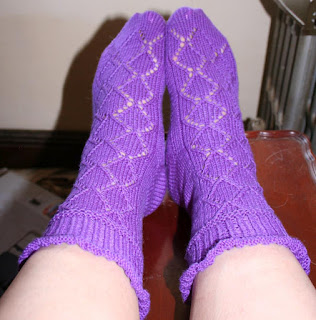 At this point, the book will contain 12 designs, for which I'll charge ten bucks on Ravelry via my design company, Fiberality Designs. These socks are made with Cascade Heritage Silk. The other socks were designed with Koigu KPM Solid, Lorna's Laces Shepherd Sock, Crystal Palace Panda Silk and Cotton, Mini Mochi, Knit One Crochet Too Ty Dy Socks, Spud & Chloe Fine, Universal Yarn Poem, Cascade Heritage 150. And you'll be able to memorize the stitch patterns so you don't need to drag the charts with you. That's the Keep it Simple shit.

Is there another sock yarn you'd like? Let me know down in the comments. I want to publish this book by the end of October. All the socks are cuff down, with lace, Fair Isle, cables, textured, mosaic, and possibly intarsia (I'm still working on that). Most knitters I know prefer cuff down, don't like toe up or short-rowed heels. I did do one design with short-rowed heels, simply because it suited the design.

The one thing that pisses me off regarding sock patterns published in books and magazines is the lack of sizing. Shit, I've got big feet and if the pattern is only sized for medium, I feel for those knitters who don't know how to size patterns. So my designs cover three sizes, Small, Medium, and Large, along with a couple designs for guys' feet. I also make sure that the patterns can be worked with dpns or Magic Loop, although there are two patterns that must be made via ML.

Remember when I hated Magic Loop? No more. Yeah, I was wrong about it. I'm hooked. From a designer's viewpoint, it gives you more space for stitch patterns, especially lace. If you have a decrease that occurs between two dpns, you're fucked. With the stitches divided in half between two needles, you don't have to worry about what happens between Needles 3 and 1.

Think I should do some baby socks too? My Jerry says I should design socks for a cat and dog. Yeah, I've got Ranger and Samantha at home to model them. I got Ranger in January. He was rescued by my grandson Ian. Here he is, spinning! 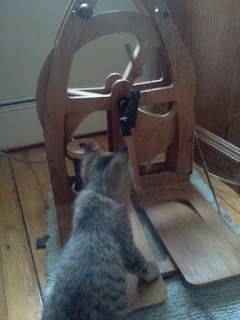 He does prefer spindles.

Writing Right
Yes, we'll get back to this again. I recently bought a sock reference book, The Sock Knitter's Handbook, and when reading it, my brain kept shouting "What the fuck are they talking about?" Some of the directions were badly written, specifically the Short-Row Heel with Wraps. Plus, they named some of the heels oddly. It does have a good table for foot measurements but other than that, I wasn't wild about it. If you want to learn how to design your own socks, stick with Nancy Bush's books and Ann Budd's great Sock Knitting Master Class.

Next week, I'll add the next chapter of Writing Right because I know some of you have been waiting for it. I'm developing a workshop for this. Would love to teach it at Vogue Knitting Live and Stitches.

Da Mags
Haven't bought many of them recently but I must say that IK and Knitter's have vastly improved. And The Knitting Universe web site was finally redone and cleaned up. It's not longer a mess. Looks good.

Buying magazines these days can be done via your iPad or tablet. I have a subscription to VK on my iPad. Yeah, I'm the owner of 200+ knitting books and magazines dated back to the '70s. I'll always love paper but I now use my iPad to carry my design charts, a couple of knitting books, and some knitting apps. My smartphone contains a bunch of knitting apps. I use County, a digital row counter, all the time.

Knitting Celebs
Writing this interactive e-book app for a publishing company is great, although you probably won't buy it because it's for novice knitters. Nonetheless, it's a great opportunity for me. I've often thought that I'd like to return to my original publishing job, a knitting editor. You know that I was an Assistant Knit/Crochet editor at the long-gone McCall's Needlework & Crafts back in the early '80s, then went on to edit MacKnit, a machine knitting magazine. I worked with Susanna Lewis back then, edited Sasha Kagan's designs--she had just published her first book then--and worked with Sasha's photographer, who shot the magazine's pix.

I have supported a number of now well-know knitting designers before their names became big. Will they support me now? Probably not. The ones in my head are totally self-absorbed and more interested in how many famous knitting celebs are their "friends." Fuck knitting celebrity. The true celebs, people like Nancy Bush, Kristin Nicholas, Gwen Bortner, Deborah Newton, are real people, down-to-earth folks, and incredibly knowledgeable and talented. I've met and know plenty of the celebs and frankly, a bunch ain't rare and handy.

Just because you are a notable designer does not mean you know how to teach. I don't take knitting classes. I did try at the first Vogue Knitting Live but sitting with a bunch of people knitting shit I already know how to do was a total bore. However, I suspect that many people take classes simply because they want to meet the designer and when they discover that the designer doesn't have a clue as to how to teach, they get pissed off. Teaching isn't simple. You've got to empty your brain and make sure that you cover all the little shit that you take for granted as an expert. Having spent many years as an IT tech writer and trainer, I've learned a lot about how to support beginners. In fact, I just taught my friend Mary Jean how to knit when Jerry and I stayed at her house in Maine last month. Talked to her last night and will teach her how to purl this weekend, I hope.

Gotta get back to the book. And empty my brain.

Thoughtful post - thank you. Completely with you on the 'knitting celebrities'; teaching is a rare skill, and it needs great enthusiasm to share with anyone at all, not just eager beavers or 'the right people'.