Best Quote I Heard All Day
Who's to know? Who was to know?--Lennon and McCartney

Yes, today is the blog's 9th anniversary. For those of you who are either too young to remember The White Album or weren't fans, here's a video for you.


It's hard to believe that it's been nine years. Time has passed quickly, as it always does. You'll see in the sidebar that I've added a new feature: A chat widget where, if I'm online and you're here, you can talk to me live.

Last year, on the 8th blog anniversary (note that I never use "blogiversary" because it's almost as idiotic as "knitterly" and other dopey terms), I did write extensively about the Knitting Curmudgeon history. So today I'm giving you a short summary because A) I'm tired and B) I refuse to rewrite the same shit, ergo a brief post today.

I remember the day I found Blogger and went "Holy shit! This was made for me!" The Knitting Curmudgeon started as a website on AOL back in 1998. I learned a little HTML coding, created several pages that included an essay on Aran Knitting, and one called "Anatomy of a Knitting Disaster." At that time, I was on the KnitList, running my mouth as RaveledSlv, but when I bought my husband Jimmy a book called "The Portable Curmudgeon," it hit me that I was in fact a knitting curmudgeon.

In July 2002, there were probably less than 200 knitting blogs. Long before YarnHarlot, Panopticon, and the others, it was me, Bonne Marie of ChicKnits, Dangerous Chunky, Red Lipstick, WendyKnits, Carrieoke's Knitting Blog, and a few more whose names escape me right now. We were the first knitters to step away from the mailing lists and put our crap out on the internet.

When Jimmy died in January 2002, I was a lost soul. Yes, I was knitting at the hospital when he died. After a few months of horrific grief, I began to get my shit together. But I still needed something upon which to focus heavily, a project that would take my mind away from my unmitigated sadness and hideous financial issues. Having been a writer since I was eight years old, the same year I learned to knit, writing a blog seemed to be an ideal solution. So off I went. My first entry was about the Vogue Fall 2002 issue. Here's the very first paragraph I wrote:

The state of knitting magazines being what it is lately, I was more than pleasantly surprised with the decent designs featured in the Fall 2002 issue of Vague. Mind you, there are still enough designs for the HYUKs (Hip Young Urban Knitters, a ghastly acronym invented by the ubiquitous Lily Chin) and some silly ones at that. But I understand Vague's marketing needs...and I can appreciate their bowing to demographics.

I think Loopy was probably the only person to read that first entry. But suddenly, people who had read my website showed up on the blog! And then there were the wars with the KnitDweebs. Longtime readers will recall the Purling Puppies war. Loved it!

So, have I changed over the years, now that I'm 61 and supposedly an old crone, although even my dear mother says I don't look my age. She may be right but I'm still a smartass. What I do believe has happened over the past nine years is that the knitting world has gone out of control, with too much information, actually. The Knitdweebs are still out there, yarn bombing and acting like maroons. Sadly, the internet has created the instant-gratification disease that affects too many people. Lack of concentration, inability to learn by doing, desire for fast and often bazaar knitting. Sure, there are plenty of people who want to increase their skills and knowledge but I must say that I keep meeting knitters who want to do their work down and dirty.

I do believe that blogs are becoming less and less popular, simply due to social networking. People don't fucking read extensively anymore. Well, that won't stop me and many of my fellow bloggers but I do predict that blogs will vanish within the next five years because they will become incorporated into the social networks. Your Steekin' Geek can see where technology is going and along with Borders, I think blogging will become bankrupt. Fuck it. I'll be with you until I croak.

That said, the greatest gifts I've received from writing this blog are my readers. Many have become personal friends, people who I love and cherish. And now that FaceBook's the place to be, a lot of readers have friended me. If nothing else, that's fucking rare and handy!

I Get By With A Little Help From My Friends.

If it hadn't been for In His Own Write, I probably never would have become a writer. At 14, I had already written many poems, a short story for my junior high school literary magazine, but when my best friend Dottie and I read this book, it pushed us into a creative sphere that has never ceased. Dottie was the artist, I was the writer, and we mucked around trying to do our own Lennonish stuff. She called me Mother Marsh, I called her Dob. And then our friend Peggy, who was also a writer, became Pegret. After 47 years, we are still close friends, still call each other Mother Marsh, Dob, and Pegret, and we all still spill creative juices.

So now that I am again unemployed and wondering how the fuck I'm going to make money, I decided to resuscitate the Rock 'n' Sock book. With one prototype done, and a few more to go, I've contacted Sixth and Spring Books to see if they will accept my book proposal. They will. And if they don't want it, Martingale Press will take my submission. 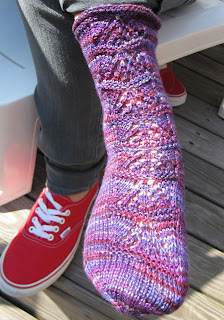 Thanks to the Punk Princess for modeling Stairway to Heaven socks. This is strictly a prototype, done in Black Bunny Fibers Silksock. I will have to rework it in another commercial yarn so that knitters can re-create it, probably in Crystal Palace Panda Silk or possibly Madelinetosh.

Also reworking the old Gansey sock pattern from back in 2007, for submission to Knitty's Winter 2011bis issue. 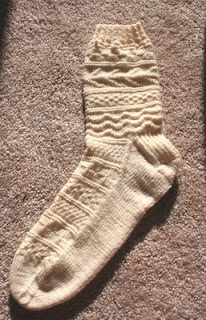 I've altered the design considerably, so this ain't what it's gonna be. I can't show ya. Against the rules.

WTF, Socks?
Sock knitting is my favorite design mode. Cuz I'm fucking lazy? Nope. Because it allows me to screw around with different design concepts in a short but sweet manner. Once the book is published, the next potential project will be an online fiber design magazine that will include knitting crocheting, spinning, and simple weaving projects.

Yeah, I was a knitting editor in the '80s and perhaps it's time to go back to my roots. After all, other than Vogue Knitting and Rowan, I can't be bothered with the other mags. However, the online magazines are far more accessible and mine will be free to readers. Because I'm a steekin' geek, I can do all the site dev myself, as well as the marketing crap, the writing, and the acquisition.

I wanna leave this world as a knitting writer and editor, not an "IT Professional."

Child Blogger
This apple fell right from the tree, given that both her parents are and were writers. My daughter Jenn, a long-time member of the Society for Creative Anachronism, a wonderful group that does great medieval re-creation, has started her own blog--Kintala. Jenn doesn't knit but sews and embroiders beautifully. Any of you who were on the KnitList with me back in 1996 may remember her Medieval Wedding. She designed and made her wedding gown, along with all her bridesmaids' dresses.

Analversary
Yep, the Knitting Curmudgeon blog is about to turn nine years old on the 25th, in six days. I will be posting that day, for sure. With Remembrances of Shit Past. That year, 2002, was rare but terribly unhandy.

Later, skanks.
Posted by Unknown at 3:27 PM 2 comments: Links to this post