Do you ever watch "Jersey Shore"? No, this Jersey girl couldn't be bothered since most of the cast supposedly comes from Long Island, Staten Island, and the city. But I do like Snooki's quote--I've knitted with plenty of big balls of fuckness.

If you're going to the beach, how do you say it if you're from Jersey? "Goin' down the shore." 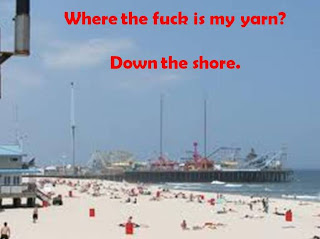 So I think, with apologies to Debbie Macomber, who is not a Jersey girl, that I'd read a book or watch a series called "Jersey Shore Knittin' Guidettes." In fact, I've come up with the characters, a group of Jersey skanks who live the over-the-top life. And steal yarn when possible.


Hoodi--Runs a knitting kiosk on the boardwalk at Seaside Heights. Hoodi hides her Jersey big hair under a knitted cotton sweatshirt, teaches her customers how to pick up stitches using their nails, and was recently arrested for stabbing her boyfriend Woodie in the crotch with a #7 straight needle while threatening to garrote him with the matching circ.

StellaBaby--Hoodi's younger sister, who insists on crocheting granny squares, much to Hoodi's annoyance. StellaBaby flogs her crocheted afghans at the bar across the way from Hoodi's kiosk, selling them to teenagers who need coverups for under-the-boardwalk luv sessions.

Nicoretta--Hoodi's best friend, who refuses to knit anything other than Red Heart. Nicoletta worked at the local WalMart until she was fired for stealing boxes of Fun Fur.

Scudetta--StellaBaby's boyfriend, who loves to knit, hates crocheting, but as a straight dude, is terrified that Hoodie will "out" him to his coworkers at the fire department. Scudetta keeps his sock knitting hidden in his NY Yankees sports bag, sneaking a stitch or two alone in the locker room.

Mama Cawfee--Hoodi and StellaBaby's grandmother, a former madame who raised the girls and has retired, whiling away her time knitting and rocking on her porch, shrieking obscenities at passersby.

Fattie Hardbuckle--Grossly overweight, Fattie insists on knitting size 60 bikini bras from cotton, despite Hoodie's warning that the cotton will stretch when Fattie jumps into the water. Fattie is a pattern size vigilante, raiding yarn shops that only sell books with patterns for skinny broads.


The Guidette Knitters--Hoodie's knitting crew, who frequent the arcades, jamming needles into the pinball machine coin slots to get beer money, throw yarn balls at the seagulls, and sit on the boardwalk benches with their knitting bags and Buds.

So, I think this has reality show potential. The antithesis of the Vogue Knitter. We're real people in Jersey, although not always rare and handy.

Just a quickie today. More next week, with the promised info on Android knitting apps.

I don't watch Jersey Shore, but a show about Jersey ho's who knit? Fuck yeah!

I don't watch it, either, but was raised in Point Pleasant! Thanks for the good laugh. pat

Fantastic! Do we need beach badges if we want to knit a few rows with the Guidettes?

When they cast the show please, can I play Mama Cawfee? I have the vocabulary for it and have been practicing for years by knitting and rocking in my kitchen while muttering obscenities at idiots driving too fast.

I may die laughing.

Does that really work? ... "jamming needles into the pinball machine coin slots to get beer money".

Because I have several several straight needles which are lacking a mate, and I cannot bring myself to throw them out.
That would be admitting I have not followed my grandmother's advice about only stopping one's knitting mid-row (to lessen the chance of losing a needle).
She usually ended her admonition with the question "What if there was a fire? And you have to scoop up your knitting quickly on your way out the door."

Mind you, being a teetotaller she probably would not approve of beer money either. But in order to drown my sorrow over the missing needles, could the remaining ones work that way?

I love it. I don't watch much tv, but I would watch that. It would be a lovely antidote to only other knitters on tv - PBS - sicky sweeters.

Love the blog. Back to lurk mode.

Oh shit girl. You made me snort.

In case you haven't seen it yet via FB.

Happy Memorial Day, Mar! Guess you're at da shore. Best wishes and hope all is well.