Best Quote I Heard All Day
The imagination imitates. It is the critical spirit that creates.--Oscar Wilde

So does that mean I'm creative?

Yes, TMI, too much information. Too many knitting books. Way too many yarn choices. Enough already.

Ten years ago, the frenzy that now permeates the knitting industry was limited to Stitches and a bunch of KnitList Knitdweebs. Now, it's out of control. It seems that every yarn company spends its time trying to create over-the-top lines that in reality make shitty garments. Sure, the stuff looks gorgeous in the skein. P.T. Barnum certainly had it nailed. Knitters are the biggest suckers of any hobby.

The worst messes that the yarn companies promote are the damned loosely twisted "hand-dyed" single or 2-ply products that can severely fuck up the unsuspecting, ignorant knitter. Why? Because they split like hell when you knit them, and then pill within two or three weeks. The worst offenders are the sock yarns. Get real. If you make socks from these yarns, you'd better put them in a frame and hang 'em on the wall because they ain't gonna last. Ya know the term "stitch definition"? Keep that in mind when selecting your yarn.

I just finished a vest in Lang Tosca Lite. Very pretty but one of these yarns. I won't use it again. I was going to submit the design to Knitty but decided against it. I refuse to promote something I dislike, although the vest did come out nicely. I'll submit a sock design I'm doing now in Knit One Crochet Too Ty-Dy Socks. This is excellent sock yarn. One of my favorites, along with Black Bunny Fibers' Silk Sock (Carol's just put up some wonderful new colors). 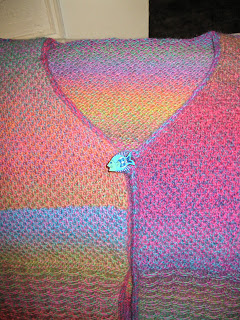 My friend Ann calls it the Caribbean Reef Vest, when I asked her for help in naming it. I had the enameled fish button in my hand, putting it up against the fabric, and Ann said, "That's it! Caribbean Reef!"


Da Mags
OK, a little behind the times here but frankly, all the winter issues were stone bores. Other than Deborah Newton's hat on the cover of VK, it was a tremendously bland issue. Even Brandon Mably's design lacked his usual exquisite colorways. The best section of VK's Winter issue was Style Revival that had great retro patterns and Socks in the City. I'm glad they've finally bowed to publishing sock designs. Of course, lots of knitters love bland. Just way too much cabled shit.

IK is once again a total mish-mosh. When in God's name are they going to organize this magazine? There are some good designs in this issue. I loved Laura Grutzeck's cardigan and Deb Newton's vest. The cover? Well, it's really tacky to overlay print onto the model's face.  Closeups are good...to a point. VK and Knitter's have always been well laid out. Put your feature articles and columns in the front of the mag with the ads, then set up the editorial section. No fuckin' ads there.

Whether you put the directions with the editorial picture or put them in the back of the books makes no-never-mind. But when you can't tell the difference between an ad and an editorial photo, you're in trouble. Plus, the teeny weeny pictures are BAD. I was looking at the sock photos and on page 94, there was a pair of socks omitted in the caption. Turns out it was Judy Alexander's Pinked Socks in a different colorway. Readers shouldn't have to figure this out. Very poor editing here.

If IK continues on this path, they'll be walkin' downhill. Yet, the staff of Piecework just published the second edition of Knitting Traditions, a fabulous special magazine. Hello, IK! Check out what your colleagues are doing. Granted, the patterns in Knitting Traditions aren't hot fashion but they are beautiful, along with excellent articles on knitting history. And you can't beat the layout.

OK, so that's my take on Winter 2011. IK's Spring issue just came out and once again, there's type on the model's face. Oy. I'll buy the issue strictly for Mary Jane Mucklestone's article on Fair Isle knitting. You can preview VK's Spring issue online.  Knitter's apparently no longer offers previews. As shocking as it may sound coming from my mouth, at this point, Knitter's is a better magazine than IK.

Friends Who Write
Gotta love 'em. So many of my friends have published excellent books worth buying. They get it. Don't publish crap, publish a book that adds to the knowledge base. And if you want a fabulous book, buy my dear friend Barb Brown's Knitting Knee-Highs: Sock Styles from Classic to Contemporary. Yeah, I know I'm a bit biased but if Barb had written shit, I'd shut my trap. Wonderful designs plus an outstanding section on knee-highs--making knee-highs, converting regular sock patterns to knee-highs, and sizing knee-highs. Barb, I swear I'll make your lace socks...but I'm involved in my own book and designs. Heh.

Yes, I'm back working on the book. Have been for several months now. I refuse to place myself under a deadline but I'm feeling the need to leave a legacy, probably because I'm going to be 61 in April. Someone once wrote that I was a knitting blogger pioneer. I suppose so. This July will mark 9 years of KC bullshit. I decided against doing the cable show simply because it would have very limited exposure. It's not worth the work if five people watch, one of whom would be Mammy.

Garbage Removal
You may have noticed that I've eliminated the Free Shit section in the sidebar. This is due to some technical stuff I have to do with Dreamhost, my site host. I still have the knittingcurmudgeon.com address, used now only to contain uploadable docs. So Free Shit will be back when I get things squared away.

Tech crap is not rare and handy. As a technical writer, I find that knitting and spinning offer me a good withdrawal from the info world. Yes, TMI and STFU. I'm lessening my presence on Facebook, don't bother with Twitter, and frankly, prefer to knit and listen to music at this point, with Countess von Puppelah at my feet. Damned dog loves to chew wooden dps. And hand-knitted socks. No, she gets no knitted puppy sweater. Ever. 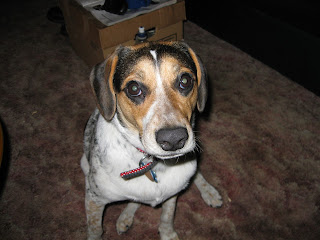 oh, Mar, I love a good rant! Thank you! I have been paging through Knitting Traditions which is quite enjoyable.
How about this, a Freakonomics article about Ravely:
http://freakonomics.blogs.nytimes.com/2011/02/25/a-young-reader-asks-is-there-an-elitist-oligarchy-in-the-underworld-of-knitters/

I read the Freakonomics article. Excellent insight from this young woman. I'll write about it next week. Ratings are idiotic.

IK = teh suck! I am letting all my subscriptions go by the wayside cause I would rather spend my money on pretty yarn (like BBF) than stupidity.

The Knitting Traditions series is timeless stuff. Should come out in hardcover, rather than as magazines.